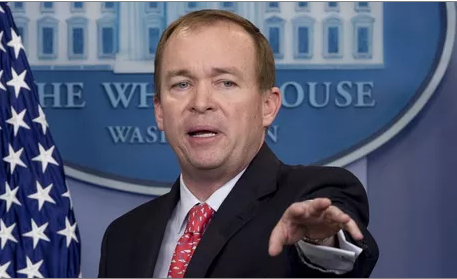 Office of Management and Budget Director Mick Mulvaney on Monday described proposed cuts to federal employee retirement benefits as one of the top four measures to save money in President Trump’s fiscal 2018 budget proposal.

Mulvaney briefed reporters on the detailed version of the president’s budget plan ahead of its formal release Tuesday morning. The Trump administration unveiled the broad outlines of the budget proposal in March.

While Mulvaney touted the proposed cuts to feds’ retirement benefits, which include a reduction in cost of living adjustments for retirees, an increase in worker contributions to the Federal Employees Retirement System and other measures, he also said the budget proposal fulfills Trump’s campaign promise not to hurt retirement programs.

» Get the best federal news and ideas delivered right to your inbox. Sign up here.

According to budget documents, proposed cuts to federal employee retirement programs would save the government around $4 billion in fiscal 2018 and $63 billion by fiscal 2027.

The elimination of cost of living adjustments under the Federal Employees Retirement System, and reducing the COLA by 0.5 percent for Civil Service Retirement System employees would save $524 million in fiscal 2018 and $41.8 billion over 10 years.

Increasing employees’ contributions to FERS by 1 percentage point a year for six years would reduce spending by $1.7 billion next year and $72.1 billion by fiscal 2027.

Unspecified “other federal retirement changes” would reduce spending by $1.9 billion in fiscal 2018 and $35 billion over the next decade. This could include measures reported last week like basing the value of employees’ retirement benefits on their highest five years of earnings, instead of the highest three years, and the elimination of supplemental payments for FERS employees before Social Security kicks in at age 62, beginning in 2018.

Jessica Klement, legislative director for the National Active and Retired Federal Employees Association, called the statements from Mulvaney on protecting people’s retirement hypocritical. “You’re taking benefits away from one group of people of the same general demographic for no other reason than that they’re federal employees and retirees,” she said.

“The administration cannot balance the federal budget on broken promises to federal workers,” Valdez said. “In fact, these proposals will only damage employee morale and productivity and also have the unintended consequence of discouraging young talent from considering public service, because they will view Uncle Sam as an unreliable employer. I encourage the administration to reconsider these shortsighted proposals and focus their attention to true drivers of the nation’s debt.”

Tim Kauffman, a spokesman for the American Federation of Government Employees, also came out against the proposed changes.

“Obviously, we’re opposed to any cuts to federal employees’ retirement benefits,” he said. “We don’t think cutting retirement is the right way to make the country great.”

Tony Reardon, national president of the National Treasury Employees Union, said the proposal hurts’ workers ability to plan for retirement.
“Federal employees and retirees had a deal with the government that they planned their lives around,” Reardon said. “Now the administration wants to pull the rug out from under them after Congress has just recently acted twice to increase required payments from federal employees for their retirement. It is appalling to go after the modest retirement of nonpartisan federal workers while prioritizing programs for corporations and the wealthy.”
Check out the full article here!